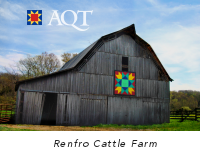 The Appalachian Quilt Trail is a genuine backroads adventure among a patchwork of blue mountains and green hills, rolling farmland, lakes, and meandering rivers, rocky ridges and fast-moving streams. As you explore the trail, you many encounter century farms and barns where rugged Tennessee pioneers helped forge a new nation out of a wild land.

The Appalachian region in Tennessee extends from the deep mists of the Great Smoky Mountains to the blue ridges of the Cumberland Plateau, and is bisected by the ecologically diverse Clinch River, as well as the Holston, the French Broad and the Tennessee Rivers. Take a hike, ride the rapids, stop for hand-pressed cider or fine Tennessee wines... Soak away stress in a natural hot spring... Browse for handcrafted gifts, learn some folklore, or tap your toes to great local music... After an afternoon spent touring the rural and mountain side-roads, you may come away with a stronger impression of the culture and heritage of the region and places that have remained relatively unchanged for centuries. Even if it's close to home, the Appalachian Quilt Trail is miles from ordinary and truly Tennessee.

What's on the Trail 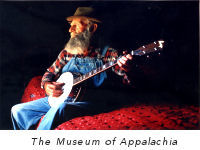 Past and present often travel side-by-side along the trail, with old homesteads, farms or stores kept in families for generations. Many of the quilt squares you will see on buildings are replicas of old family patterns.

The variety of stops along the Tennessee regions of the Appalachian Quilt Trail showcase a rich history. Tennessee's earliest-known inhabitants of Tennessee were mound builders, still present when the Spanish explorer Hernando de Soto became the first European in what is now Tennessee. At that time the Cherokee Indians inhabited East Tennessee; the Shawnee, Middle Tennessee, apparently on Cherokee sufferance; and the Chickasaw remained in West Tennessee until 1818. As you travel the trail you will have the chance to explore the storied Native American traditions of East Tennessee. 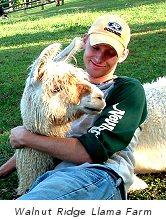 If you are a history buff, you will want to see some of the homesteads, battlefields, and historic sites that reflect 200 years of Tennessee life. For example, visit the homes of future governors John Sevier and William Blount, learn about heroes like Davy Crockett and Sam Houston, and see the sites of decisive battles such as King's Mountain and Bean Station.

Because of its position as a border state, more Civil War battles were fought in Tennessee than any other state except Virginia. Tennessee was the last Southern state to secede, torn between the nearly unanimous Union support in the abolitionist east and equally strong support of the Confederacy in the slave-holding middle and west. Stop along the way to learn about the people and the battles that shaped this unique region.

If you are interested in a more contemporary experience, take advantage of the shopping, the romantic dining, the boating, the theaters, and of course, the scenery. So whether you are in search of colleges or covered bridges, llamas or cranberry bogs, country fairs or wineries, you are sure to find something to please along the Appalachian Quilt Trail.

Clinch-Powell RC&D is a 501(c)(3) nonprofit, rural community development organization serving Claiborne, Grainger, Hancock, Hawkins, and Union counties. Our mission is to serve the needs of our communities, to protect our environment, and to enhance the quality of life of the people of the area through leadership, education, volunteerism, and action.